Is End-User Downtime Really Costing You And Your Business?

Is End-User Downtime Really Costing You And Your Business? 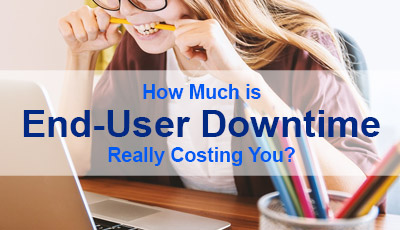 There is hardly any IT department that can ignore the requirements of its end-user downtime particularly when their success is dependent on ensuring them to be fully functional all the times.

However, the key issue is that even the most process-oriented and diligent organizations, which time stamp and track all their support activities, might not possess the relevant data on downtime that disillusion the users prior to them connecting to a technician or a live agent.

Hence, it is hardly surprising that such costs can prove to be highly expensive as support functions remain status quo. It is understood that organization-wide network outages can come up as the most important issue during end-user downtime discussion. However, unavailability of IT resources and momentary halt in application level operation for resolving such issues may add up to become as expensive over time. Nevertheless, a majority of IT companies exhibit a tendency to bear downtime for end-users in small doses. This is because these businesses do not regard it as important as company wide or client facing issues until they start computing.

While there is a loss of employee productivity, it is only a tip of the iceberg as far as the issue of internal cost is concerned. For instance, when the affected end user is discouraged to participate in revenue-generating tasks temporarily, such expenses get compounded even further. After all, it is not an easy task to understand how the effect on one person produces the ripple effect on another. In reality, unless the job functions of an end user are entirely self-contained, implying that others do not rely upon the timely execution of such activities, there could be a chain reaction at an organizational level due to the halt in the workflow.

High abandon rates are a key indicator that can measure end-user downtime. The parameter is a percentage of inbound end users who hang up since they did not get any response even after waiting for a long time. Abandon rates are high frequently because there is an inadequate number of staffs at the service desk that cannot manage during after years, unscheduled absences, and peak periods. High abandon rate can be also an outcome of an inadequate support model such as using one’s IT employees for double duty on-site and remote support tasks. These are instances when there is a dramatic rise in the end-user downtime. They may also occur when a business dispatches its service desk agents for certain projects that may take them off their desks making the unavailable to attend inbound phone calls.

Although these companies realize that frequent end-user own-time can be an issue with difficult to track financial consequences, resolving those issues may not feature as top priorities or their corporate wish list for their coming year’s IT expenses.

Once the conversation manages to become actionable, there can be manifestations in the form of hiring more permanent employees on the payroll or get them through a third party provider.

How Does Service Desk Outsourcing Work In Sync With Support Environments?
October 30, 2018

Top 3 Tips To Support Leadership Changes In The IT Industry
October 24, 2018

How Expensive is a Cheap Help Desk Outsourcing Solution?
October 23, 2018

Repercussions of an Underutilized Service Desk for a Business
September 7, 2018

Service Desk Client Satisfaction and Account Management
September 6, 2018
Go to Top
This website uses cookies. We will assume you are fine with this. You can opt-out if you want to.AcceptRead More